Meliora Testlab team is proud to announce a new version of Testlab – Polybius. In addition to smaller enhancements, many of the new features revolve around parameterization of test cases. It is now possible to create test cases as templates and when executing them, enter the parameters of the template to easily create variants of the test case.

Test cases can now be embedded with parameters. Parameters are basically tags entered to test cases’ description, preconditions, steps or to the expected end result. In the content text, parameters should be entered as

When the test case is entered with parameter values, later on, the actual description shown to the tester will include parameter tags replaced with entered values.

Using parameters is an easy way to create many executable variants for a test case with similar description content. For example, if you have a set of test cases intended to be run with each different web browser variant, you can describe your test case with an appropriate ${BROWSER} tag. This way you can easily plan & execute this test case for different web browsers by entering fitting values for this parameter later on. 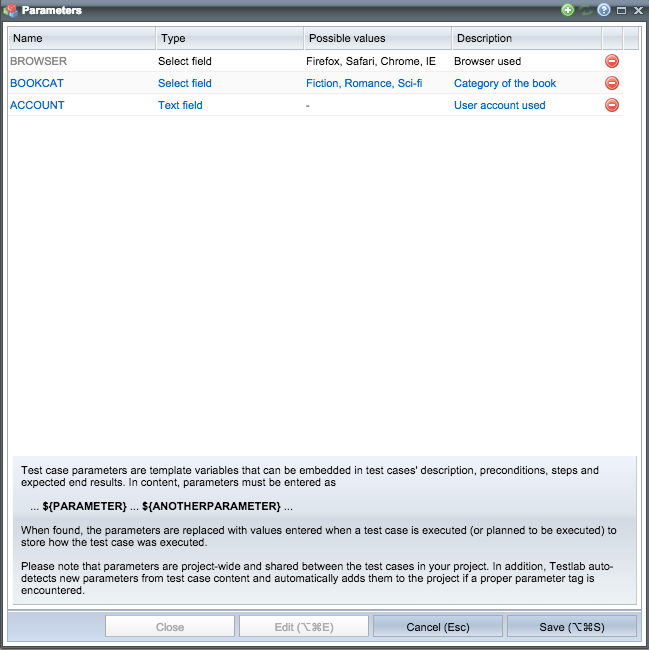 Testlab includes a management view for all project’s parameters. You can configure your parameters as selection lists, which restricts the values that can be selected for these parameters.

Planning and running tests with parameters 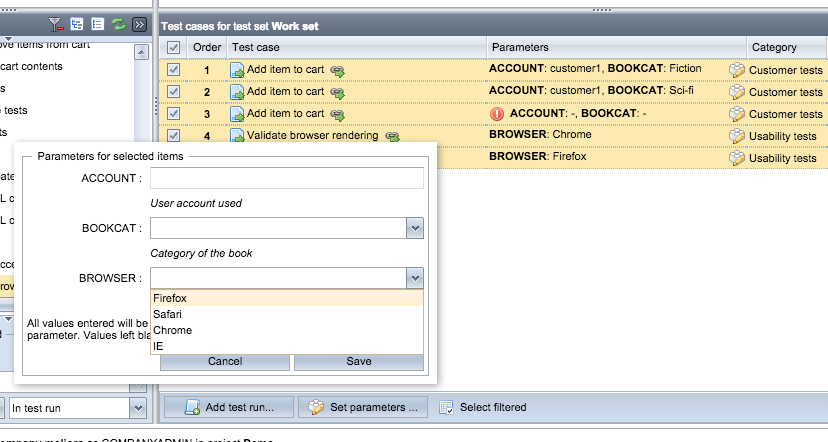 The test execution view has similar controls where you can enter parameter values for test cases already added to a test run. 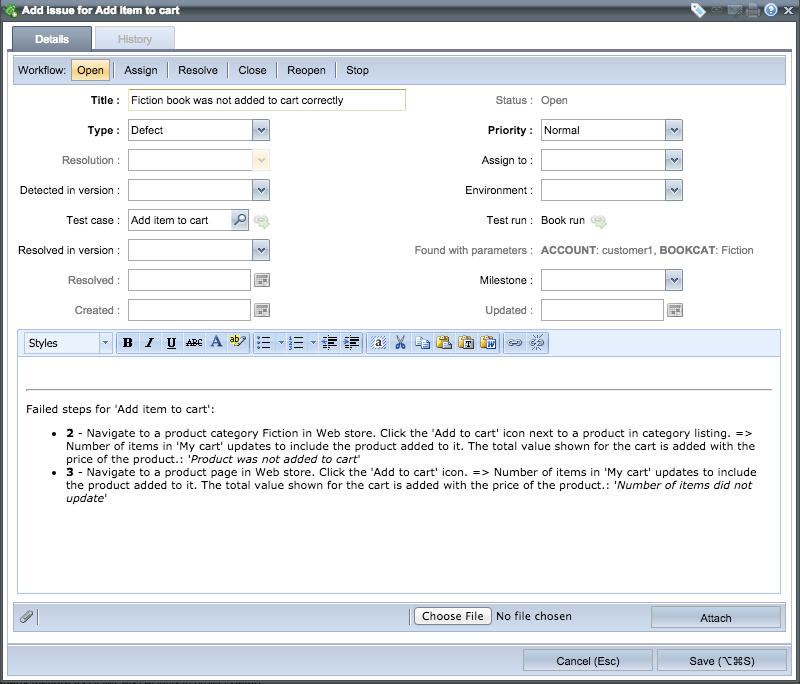 Coverage and reporting with parameterized tests

Meliora Testlab Jenkins plugin now supports passing test case parameters from Jenkins’ environmental variables. You can list the variables which are passed as they are with the results and will be included as parameters at the Testlab side.

For example, test case(s) in your Testlab project might have a parameter titled ${BROWSER}. When running automated UI tests in your Jenkins, enter a value “BROWSER” to this new setting and ensure that your Jenkins job sets an environmental variable BROWSER to some sensible value. This way running the job sends and sets the ${BROWSER} test case parameter value to all run tests to a value matching to the environmental variable. 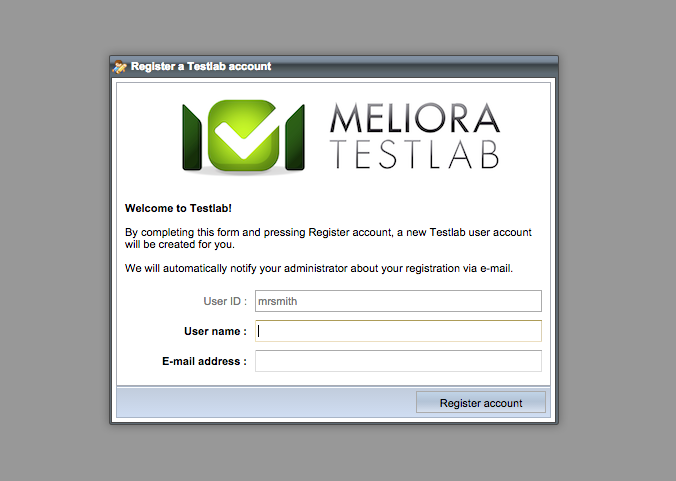 Previously, when users authenticated via an external source via CAS came into Testlab, if they had not yet been created with the Testlab user account, they could not log on. This is because authorization to Testlab’s projects is done via Testlab’s user accounts the needed roles and permissions must be granted to these users for the access.

This version is improved in a way, that when a user without the Testlab account gets authenticated via CAS, he/she is shown with a welcome screen allowing her to register a personal Testlab account by entering few details (e-mail address, full name). The Testlab user account is then automatically created and an e-mail message is sent to the company administrators notifying them about the new account.

The on-premise version of Testlab can be configured to automatically grant a set of roles in a set of projects when a new user account is registered via CAS.

Relaxing the SSL verification of the host name for ticket validations

When setting up CAS, the client can now be configured to skip the host name check of the SSL certificate when verifying CAS tickets. This may help setting up CAS with self-signed certificates or with proxy configurations.

Fancy a game ? Polybius is an arcade game which is said to have induced various psychological effects on players. The story describes players suffering from amnesia, night terrors, and a tendency to stop playing all video games. Around a month after its supposed release in 1981, Polybius is said to have disappeared without a trace. [Wikipedia]

In the span of a week, three children really did fall ill upon playing video games at arcades in the Portland area. Michael Lopez got a migraine, the first he’d ever had, from playing Tempest. Brian Mauro, a 12-year-old trying to set the world record for playing Asteroids for the longest time, fell ill after a 28-hour stint. And only a week later 18-year-old competitive gamer Jeff Dailey died due to a heart attack after chasing the world record in Berserk. One year later 19-year-old Peter Burkowski followed suit for the same reason playing the same game. [Eurogamer]