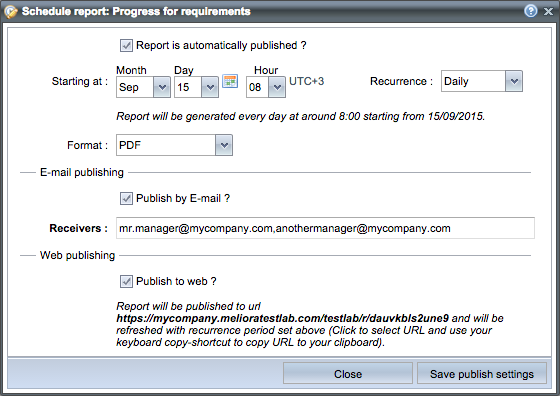 Testlab provides an extensive set of reporting templates which you can pre-configure and save to your Testlab project. It used to be that to render the reports, you would go to Testlab’s “Reports” section and choose the preferred report for rendering.

Girus enhances reporting in a way where all saved projects can be scheduled for automatic publishing. Each report can be set with a

When configured so, the report will then be automatically rendered and sent to interested parties and optionally, made available to the relatively short URL address for accessing.

Slack is a modern team communication and messaging app which makes it easy to set-up channels for messaging, share files and collaborate with your team in many ways.

Meliora Testlab now supports integrating with Slack’s webhook-interfaces to post notifications about your Testlab assets to your Slack. The feature is implemented as a part of Testlab’s notice schemes. This way, you can set up rules for events that you prefer to be published to your targeted Slack #channel.

You can read more about the Slack integration via this link. 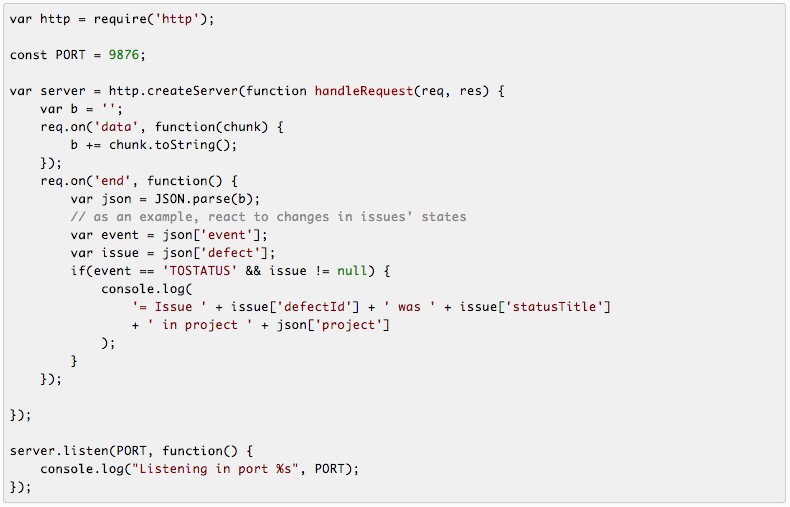 Webhooks are HTTP-protocol based callbacks which enable you ro react on changes in your Testlab project. Webhooks can be used as a one-way API to integrate your own system to Testlab.

Similarly to the Slack integration introduced above, the Webhooks are implemented as a channel in Testlab’s notice schemes. This way you can set up rules to pick the relevant events you wish to have the notices of.

An example: Let’s say you have an in-house ticketing system and you need to mark a ticket resolved each time an issue in Testlab is closed. With Webhooks, you can implement a simple HTTP based listener on your premises and set up a notification rule in Testlab to push an event to your listener every time an issue is closed. With a little programming, you can then mark the ticket in your own system as resolved.

You can read more about the Webhooks via this link.

Apache Maven is a common build automation tool used primarily for Java projects. In addition, Maven can be used to build projects written in C#, Ruby, Scala and other languages.

Meliora Testlab’s Maven Plugin is an extension to Maven which makes it possible to publish xUnit-compatible testing results to your Testlab project. If you are familiar with Testlab’s Jenkins CI plugin, the Maven one provides similar features easily accessible from your Maven project’s POM.

You can read more about the Maven plugin via this link.

When JUnit/xUnit-compatible testing results of automated tests are pushed to Testlab (for example from Jenkins, Maven plugin, …), the results are mapped and stored against the test cases of the project. For example, if you push a result for a test com.mycompany.junit.SomeTest, you should have a test case in your project with this identifier (or sub-prefix of this identifier) as a value in the custom field set up as the test case mapping field. The mapping logic is best explained in the Jenkins plugin documentation.

To make the pushing of results as easy as possible the plugins now have an option to automatically import the stubs of test cases from the testing results themselves. This way, if a test case cannot be found from the project for some mapping identifier, the test case is automatically created to a configured test category.

Test Anything Protocol, or TAP, is a simple interface between testing modules in a test harness. Testing results are represented by simple text files (.tap) describing the steps taken. The Jenkins plugin of Testlab has been enhanced in a way, that the results from .tap files produced by your job can be published to Testlab.

Each test step in your TAP result is mapped to a test case in Testlab via the mapping identifier, similar to the xUnit-compatible way of working supported previously.

The support for TAP is best explained in the documentation of the Testlab’s Jenkins plugin.

When integrating JIRA with Testlab using the Webhooks-based integration strategy, the integration now supports integrating multiple JIRA projects into a single Testlab project. When multiple projects are specified and an issue is added, the user gets to choose which JIRA project the issue should be added to.

Due to this change, it is now also possible to specify which JIRA project the Testlab project is integrated with. Previously, the prefix and the key of the projects had to match between the JIRA and Testlab project.

Pithovirus sibericum was discovered buried 30 m (98 ft) below the surface of late Pleistocene sediment in a 30 000-year-old sample of Siberian permafrost. It measures approximately 1.5 micrometers in length, making it the largest virus yet found. Although the virus is harmless to humans, its viability after being frozen for millennia has raised concerns that global climate change and tundra drilling operations could lead to previously undiscovered and potentially pathogenic viruses being unearthed.

A girus is a very large virus (gigantic virus). Many different giruses have been discovered since and many are so large that they even have their own viruses. The discovery of giruses has triggered some debate concerning the evolutionary origins of the giruses, going so far as to suggest that the giruses provide evidence of the fourth domain of life. Some even suggest a hypothesis that the cell nucleus of the life as we know it originally evolved from a large DNA virus.