Meliora Testlab – Earthquake Light – has been released. In addition to a set of fixes, this release comes with a new advanced reporting mode which allows you to customize the criteria of data on your reports in an intuitive manner. We’ve also integrated with Stripe to make subscription handling and credit card payments as easy as possible.

Please read on for a more detailed description of the new features.

Most of the report templates available have been added with an option to switch the criteria form to the new advanced mode. In this mode, the criteria for picking the data on the report can be specified as a set of rules the reporting engine will use when rendering the report.

Reports in advanced mode work in a similar manner to the earlier so-called simple mode. You can save them, schedule them for publishing and so on.

Various operators for each field 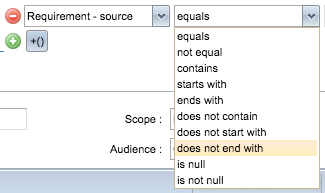 A rule on advanced reports consists of the targeted field, an operator executed to determine if the rule matches and an optional value for the operator. The mode has been implemented with a full set of operators allowing you to define a complex set of rules.

The operators available depend on the type of the field.

The criteria may be defined with sub-clauses. Each clause is set with a boolean operator (match all [and], match any [or], match none [not]) which declares how the list of rules in the clause should be interpreted.

This allows you to define a complex set of rules to pick the data you need on your report.

The hosted Meliora Testlab has been integrated with Stripe – a leading credit card payment gateway – to make subscription and credit card handling for you as easy as possible.

If any action is needed from existing customers, we will contact all customers directly for instructions.

For a very long time, people have occasionally reported seeing strange bright lights in the sky before, during or after an earthquake. For much of the modern times, these reports were considered questionable and skeptics say, there is no considerable proof of the existence of such phenomenon.

The lights reported are usually blueish and greenish dancing lights in the sky comparable a bit to the aurora borealis. Theories exist on the cause of the lights such as the electricity in certain rocks of the earth gets activated and gets discharged during the teutonic stress. It has even been suggested that the existence of the lights could be used to predict upcoming earthquakes.

The latest earthquake lights were reported was with the New Zealand earthquake in November 2016 and there are even videos circulating documenting the event.