Sneak peek to next Testlab release

Few latest Testlab releases – Mystery Soda and Sisyphus – have concentrated on bringing in lean task management features. This is an area we will continue to work on in the future, but in this post, we will give you a sneak peek at the Testlab version we are now working on.

Making the base features even better

The concepts, UI, and the way of working when doing manual testing have, to a large extent, stayed the same for a long time. We are now talking about how sets of tests are constructed, test runs created and the actual test results recorded. Yes, there have been many enhancements and supportive features have been added, but the core way of working has been the same, UI-wise.

During this time, we have been collecting feedback and opinions from our users on how to improve things. One thing that has popped up regularly, is slight confusion on how the test sets should be used and how sets are related to runs where the results are actually recorded into. The use of sets is of course perfectly optional, but the user interface for creating and editing test runs could be more clear.

The next Testlab release, due to be released in the summer, aims to rewrite the user interface for execution planning and manual testing, improve the role of test sets, and improve collaboration between testers – when testing manually and recording testing results.

In Execution planning, the new features make the editing of a test run (let it be a run not yet started or a run currently in progress) much easier. The sets are used as they initially were designed for: As pre-defined ordered lists of somehow related test cases. 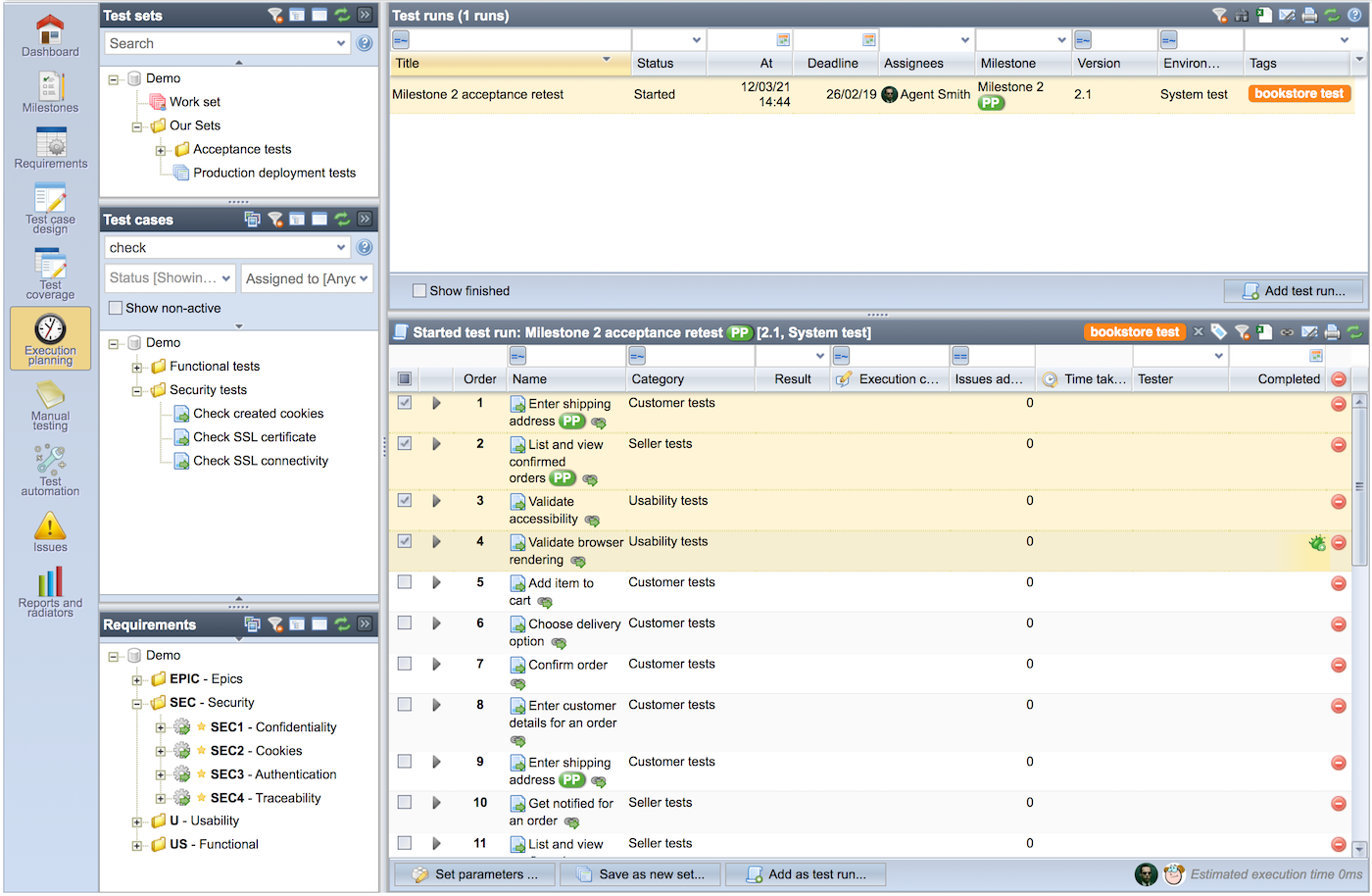 In Execution planning, the aim is to prepare and if needed, edit the existing, test runs for execution. The re-design allows you to easily

This same view is used to construct sets. If you choose a set under edit, similar controls are available for you to save the list of test cases as a test set to your categorized test set tree.

In earlier Testlab versions, when you initiate a testing session, a new window is opened and the work is done inside this session. In the new version, the testing is done in a panel of its own. The new execution view is very similar to the old one so using it should be no issue. 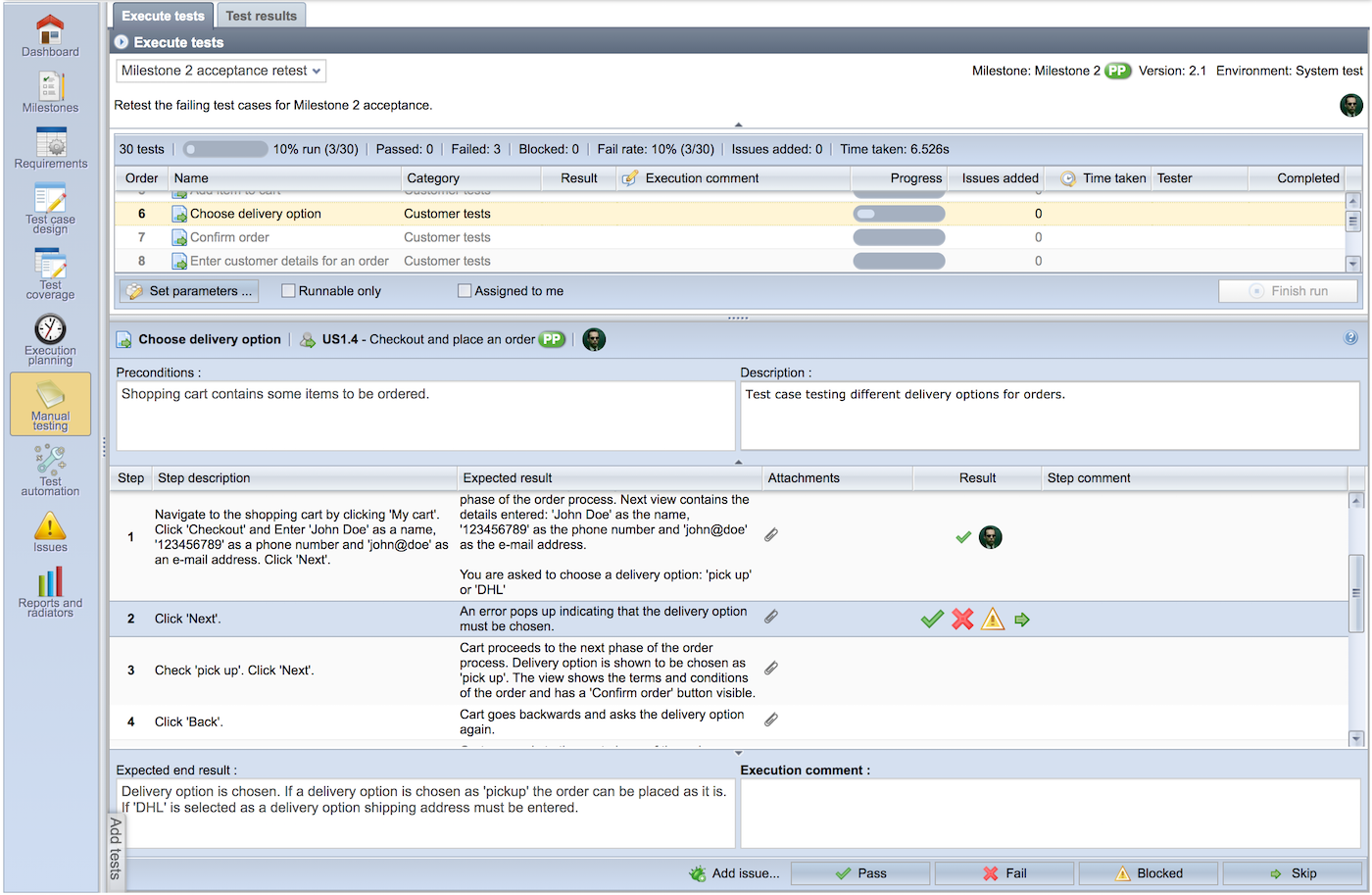 The new execution view provides you a real-time view of the testing work done by other testers. The progress of the run is presented in more detail and the related assets of the test under testing (such as the specification, requirements, linked issues, attached files, and such), are laid out to you so that they are more easily accessible.

The view also provides you access to the same set of test case sources as in the Execution planning view (test sets, test case tree, and requirements) which you can use to take new tests under testing while executing. These sources can be accessed by clicking the “Add tests” tab in the lower left-hand corner of the view.

A new view will be added with the purpose of just looking at the results recorded. This view should be found in the Manual testing view’s “Test results” tab. 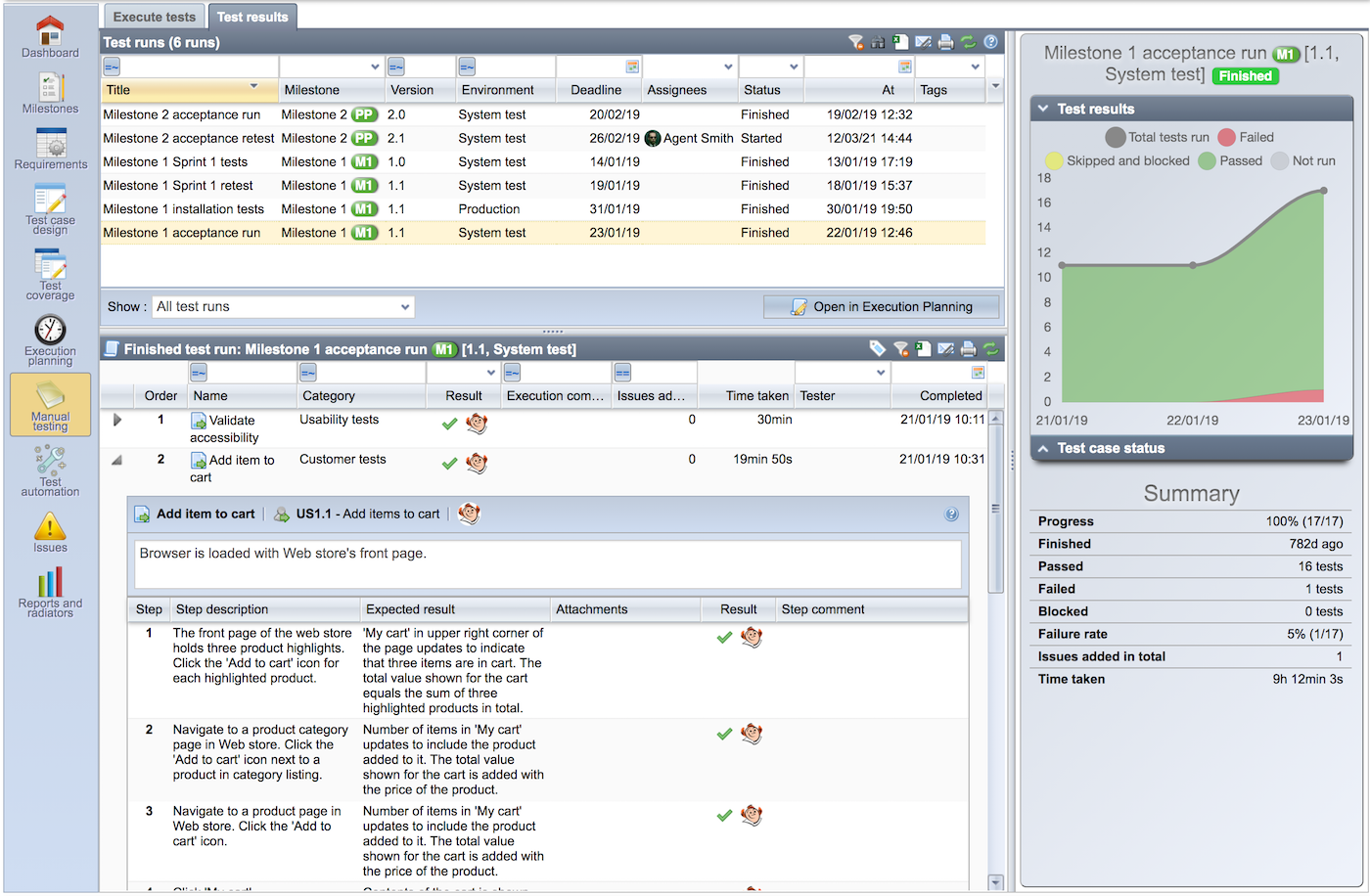 The purpose is just to inspect the results of runs in your project. You can see the results for test cases and their steps and also, a summary of the progress is shown to you with appropriate charts and pre-calculated metrics.

The screenshots of the prototype, and features explained, are not the only features to be released. We are planning to bring in teams for making the management of users easier, simplifying the concept of user roles in workflows, and more.

The prototype shown is work-in-progress and is due to be changed before release.

As our roadmap implies, these features are planned to be released in Q2 of our 2021 release cycle. The team will be hard working with these new features which mean that in the meantime, we will release bug-fix releases only.