The Team at Meliora is proud to announce the next feature release of Testlab. This release is a major one introducing a new concept – testing in the workspace – and a significant feature to improve exploratory efforts: live-editing of test cases while testing.

New concept: Testing in the workspace 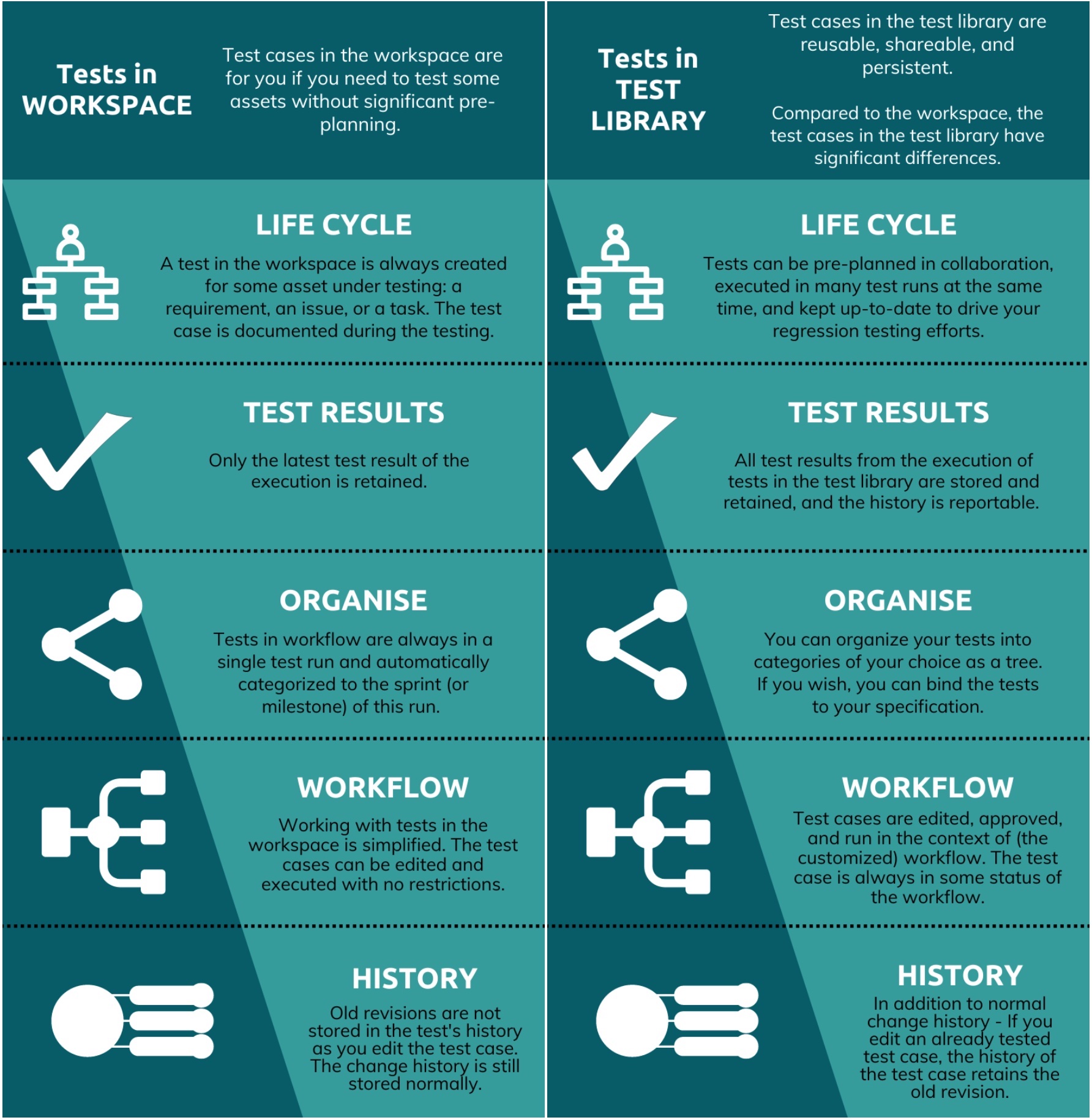 Sometimes it is best to do testing that is not so comprehensively pre-planned – such as exploratory testing or testing some aspects of features that have not been verified by test cases yet – you might want to just start testing and document the testing as you go. For this, a new concept in Testlab has been introduced. The workspace.

The test cases in your project (and in the tree of tests in the UI) are now divided in two:

The tests in the library and in the workspace have significant differences and a brief summary of them can be found in the infographic on the right.

Test cases in the workspace 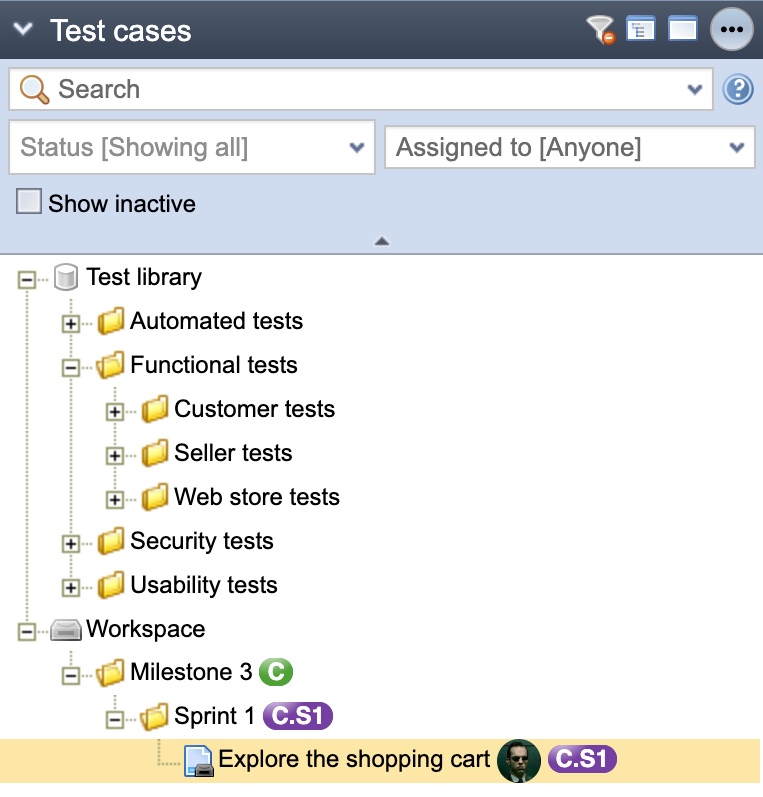 As said, the test cases in your project have been divided into two root folders. In the library, as before, you can freely design the hierarchy of test categories for your tests.

Moving tests to the library

If you are satisfied with the documentation of your tests as you test them in the workspace, you should move them to the test library for everyone to use. As you do this, you should choose a fitting test category for it. You can move tests from the workspace to the test library by cutting and pasting them in the test case tree or with the “Move to library…” feature found in the test case design view.

Changes to the API

As test cases are now divided into the library and the workspace as explained earlier, the model in the REST API has been enhanced to support these two kinds of tests. The API itself is compatible with the earlier versions but new attributes might be present. If this should affect you, please check the /api -documentation in your instance. 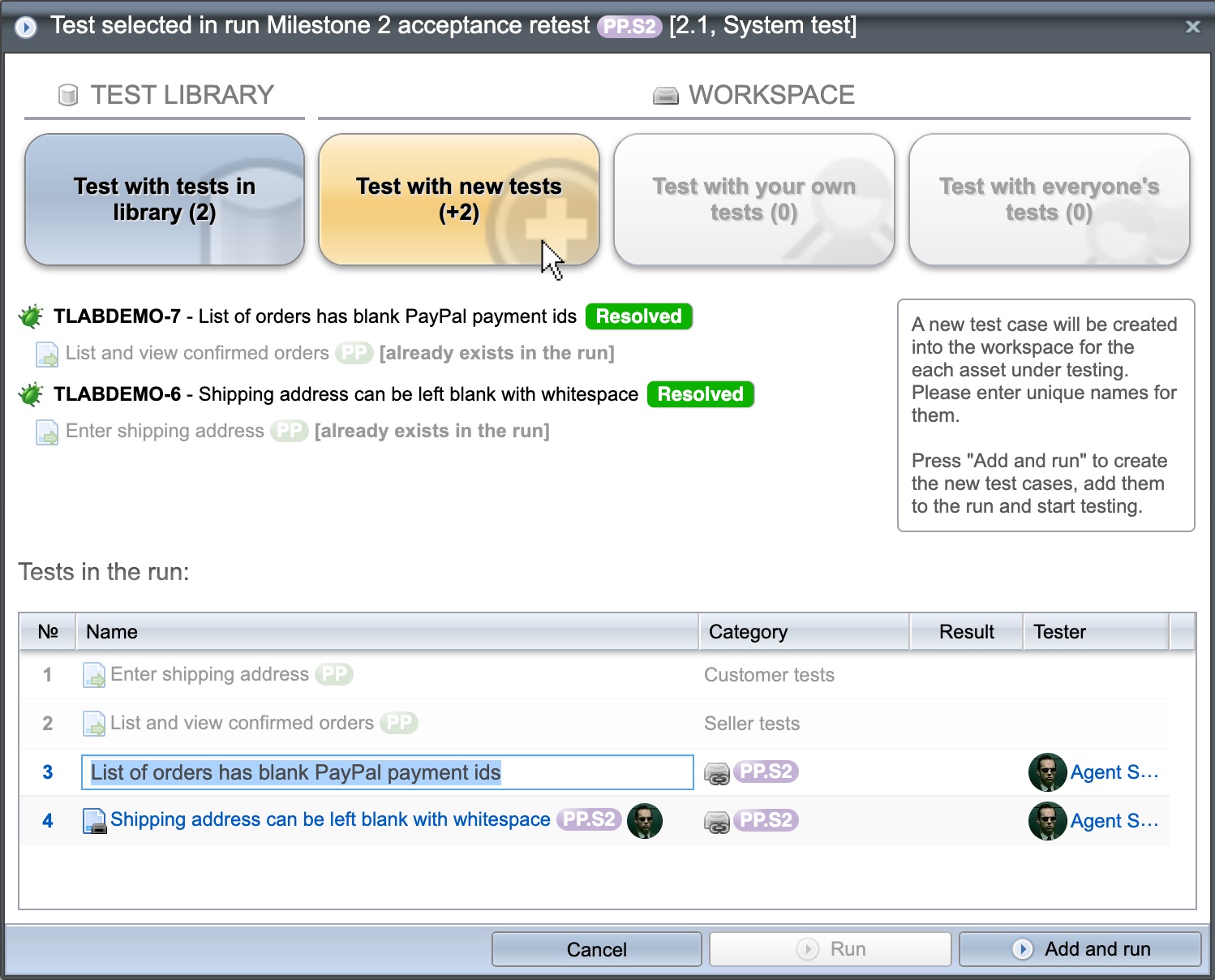 Often you plan your testing on the content of these things – or assets in Testlab. Testing these should be as easy and intuitive as possible.

For all the above assets a new feature has been added. You can find the “Test this…” feature from the applicable trees in the UI and when viewing or editing a single asset. As you wish to test an asset (or assets), you now have an option to 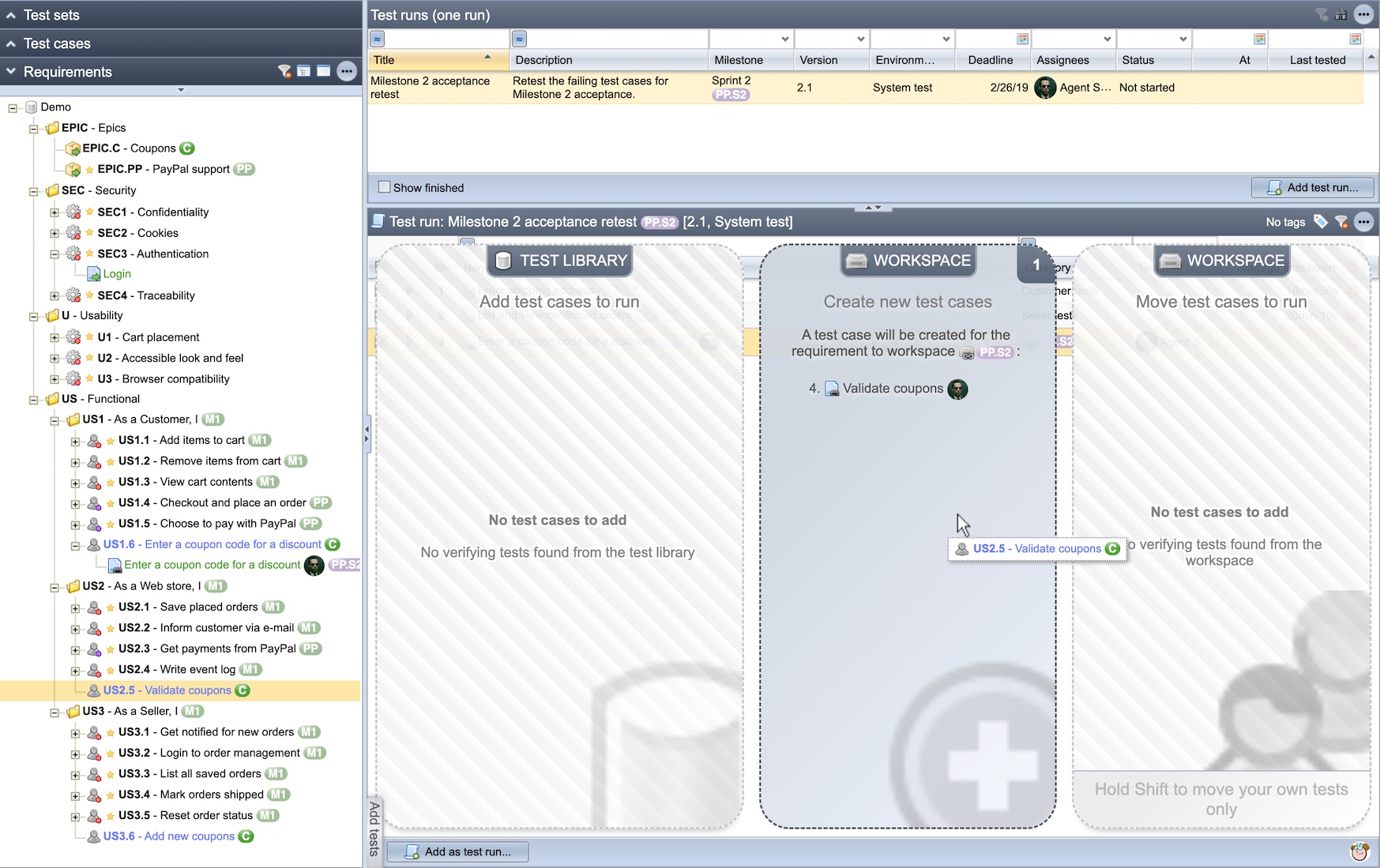 As in the earlier versions, the tests are always executed in a test run. As tests in library and test in workspace are often used in different situations you now have chance to choose which ones you wish to use to test your chosen thing. As you drag and drop things to test on your run, you are now presented with a choice on how you wish to test the dropped assets.

If you test with test cases from the test library the choice is clear: As before, the tests are just added to the run. If you wish to test requirements from your specification, you can test them with your existing verifying tests from the library or, you can choose to test them in the workspace (with new tests or with the existing tests in the workspace, if any).

The future release of Testlab will provide additional picker components that allow you to pick issues and tasks directly from this view.

For requirements in the specification, issues, and tasks, a new tab named “Test results” is added. On this tab, the executed (or planned) tests linked to these assets are shown. 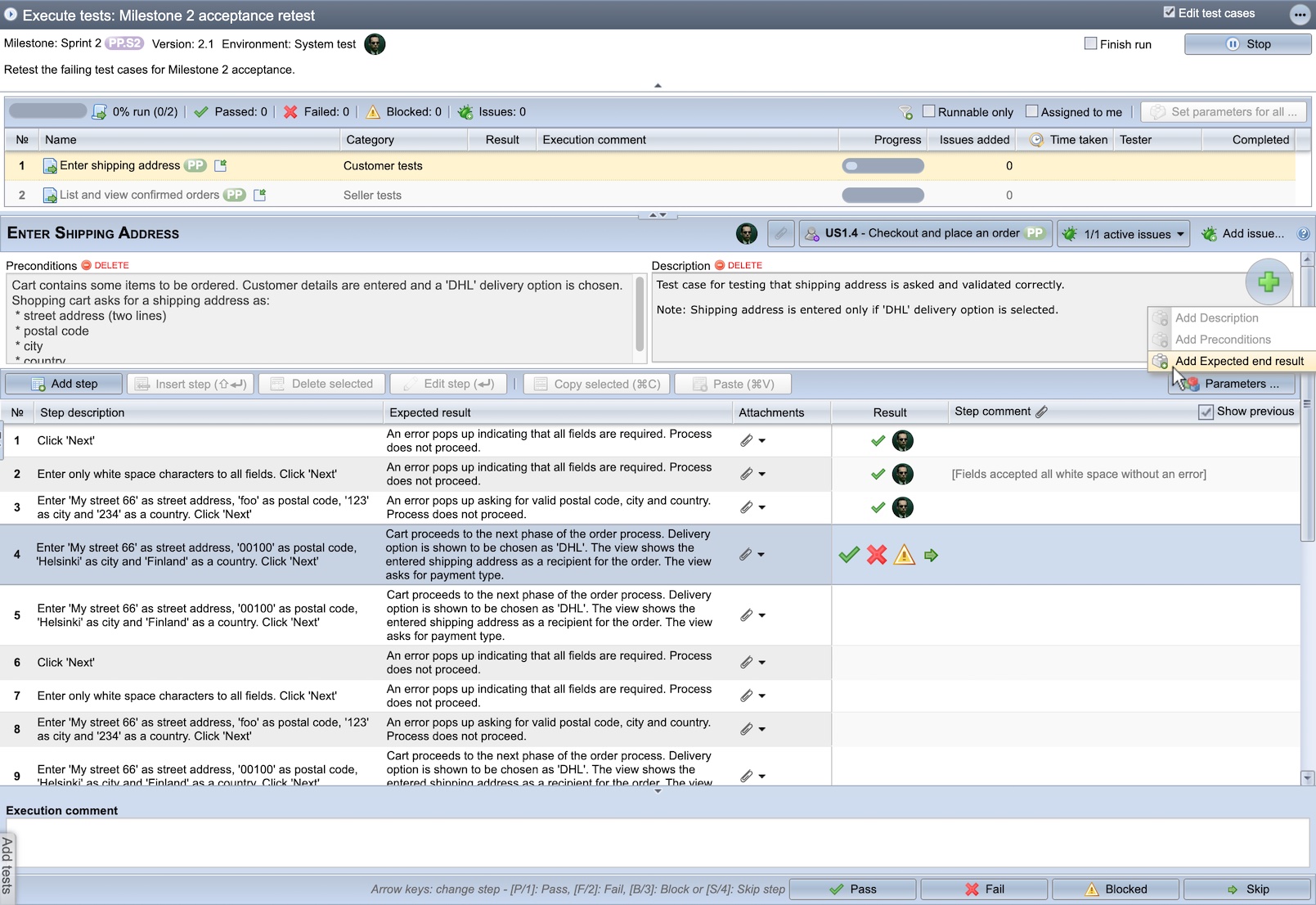 As you test with your test cases in the Test execution view, you now have the option to edit the test case while testing it. This mode is enabled by checking the “Edit test cases” option at the top (if you have appropriate permissions to do so).

The editing of test cases is especially handy when you working with test cases in the workspace. This offers you various options to do exploratory testing as you can document your exploratory findings as you go.

The live-editing of test cases is supported as follows: 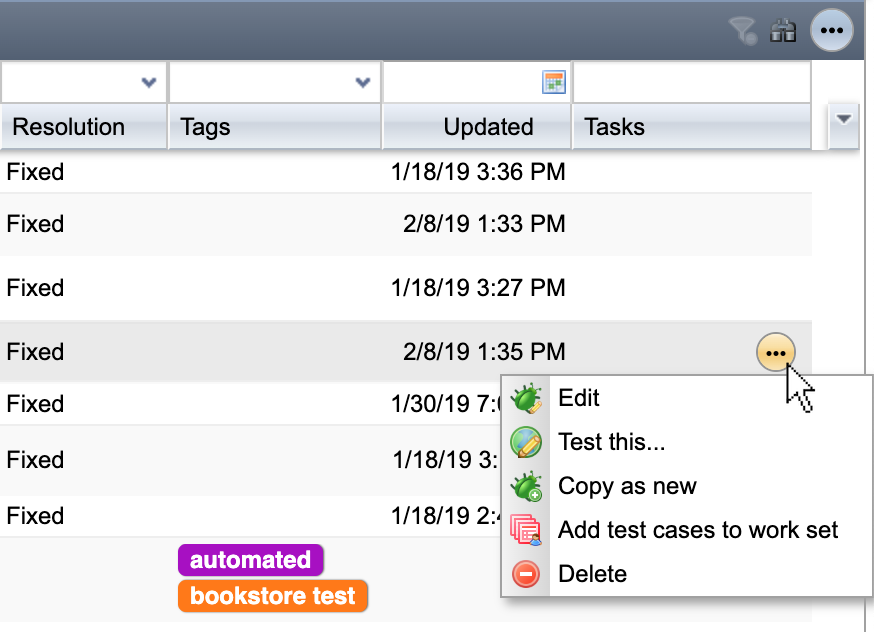 Many panels have common functions and the grids have functions tied to each row. For these controls, the UI has been made simpler by moving these controls to a new menu indicated by three dots in a circle (Please see the screenshot at the right).

In the earlier release, all these controls were presented as separate buttons side-by-side. Now, you can find these same controls in these menus.

As your team edits the specification or test cases in your project, the assets are automatically created with revisions to help to track changes.

The logic on how the revisions for test cases in the test library are added has been simplified:

Thank you for all your feedback, 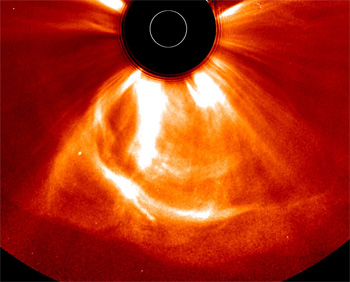 As many of us are experiencing the effects of changes in the energy market today, wouldn’t it be nice to have things running on electricity raining from the sky? On the night of 2 September 1859, telegraph operators in the US were experiencing electric shocks and sparks from their equipment. This was the night of the so-called Carrington Event, an intense geomagnetic storm caused by a massive coronal ejection from the sun.

The telegraph operators actually disconnected the power sources of their equipment just to find out that – with the current provided by the storm – their equipment worked better than ever.